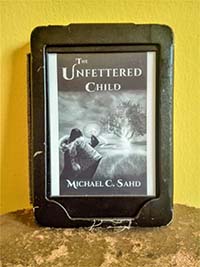 When eight-year-old Samara faces the capture of her tribe, an unimaginable power awakens within her. Even as this magic threatens to consume her, a disembodied voice intervenes, offering guidance and helping her control these newfound abilities.

Meanwhile, Samara’s father chases his wife’s captors across an unfamiliar terrain. But can Orin find his wife in time to save her? Will Samara learn to control her power and reunite with her family? And who is the mysterious entity traveling with her?

Michael C. Sahd grew up in Santa Fe, New Mexico. From a young age, he read voraciously, particularly in the fields of fantasy and science fiction. Shortly after becoming a teenager, he learned to play and enjoy fantasy games such as Dungeons and Dragons. At around the same time, he began writing stories and D&D campaigns of his own.

As an adult, Michael attended the College of Santa Fe, studying in the fields of English and literature. During this time, he honed his writing skills and expanded his writing portfolio. Although he has completed numerous short stories, Assassin Marked represents his debut published work. Most recently, he published his first full-length fantasy novel, The Unfettered Child.

Currently, Michael lives with his wife and four children in a small town in Texas, where he is working on writing the next installment of The DuFonte Chronicles.

Out of the POV’s, I enjoyed Orin’s the most – a lot of the time, he seemed like a noble character. Another character I quite liked was Sigmia. There was the odd occasions where this story seemed a little bit directionless – but once things started coming together; the book became interesting.

This book felt a bit open-ended; with a few loose ends that need to be tied up – so I’m hoping that there’s going to be a sequel to this book.