Review - A Storm of Swords by George R R Martin 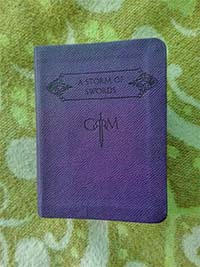 Of the five contenders for power, one is dead, another in disfavor, and still the wars rage as violently as ever, as alliances are made and broken. Joffrey, of House Lannister, sits on the Iron Throne, the uneasy ruler of the land of the Seven Kingdoms. His most bitter rival, Lord Stannis, stands defeated and disgraced, the victim of the jealous sorceress who holds him in her evil thrall. But young Robb, of House Stark, still rules the North from the fortress of Riverrun. Robb plots against his despised Lannister enemies, even as they hold his sister hostage at King’s Landing, the seat of the Iron Throne. Meanwhile, making her way across a blood-drenched continent is the exiled queen, Daenerys, mistress of the only three dragons still left in the world…

But as opposing forces maneuver for the final titanic showdown, an army of barbaric wildlings arrives from the outermost line of civilization. In their vanguard is a horde of mythical Others — a supernatural army of the living dead whose animated corpses are unstoppable. As the future of the land hangs in the balance, no one will rest until the Seven Kingdoms have exploded in a veritable storm of swords…

This was a really good book in the series for me; and it feels like I have so much to say about the characters. Mance Rayder is different than what I expected; and is very good at deceiving people, but I also suspect that he is just as dangerous. I felt that he wasn’t as bad as people claimed.

I’m still interested in how Daenerys is going to move up and her dragons’ progression as well as look forward to hearing/reading more about the Targaryen history. The history that she discovers in Astapor is fascinating.

Lysa was one of those characters that seemed really deranged; and through everything – Sansa still remains respectful.

I ended up giving this leisure read a five star rating.

I can’t quite choose which is my favourite between the first book and the third book in the series. I think I enjoyed this book as much as I did because of the shock factor that was interspersed throughout it.

I’m really hoping to start the fourth book soon – but I can’t guarantee that it’s still going to be this year.