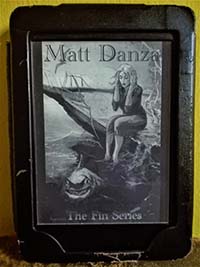 Lee Kager, her twin brother James, their best friend Adam and their father have been shipwrecked on a sandbar near the shores of Horseshoe Island. Stranded several miles from the local shore with no means of communication and the ocean’s tide rising fast, the only thing standing between them and the shore is a shark with an appetite for human flesh. Join their quest for survival as they fight their way to shore. Inspired by the blockbuster hit, Jaws. Read the book before you go swimming, and know that fate, is only waist deep.

The Fin: Revenge will Surface

Join Lee Kager as her world literally sinks around her on her quest for revenge against the bloodthirsty shark that still stalks her island a year after the attack. Driven by will for her loved ones she lost that day and fighting her sanity as she slowly sinks into madness. Her biggest struggle will be a choice between walking away and endangering those she still holds dear. They say dig two graves when on a quest for vengeance, however, the ocean holds no graves and like anything else, revenge will surface.

Matthew Danza and his best friend Adam Horeth, continue to explore the world of horror as author and editor. Their goal is to create a world of characters that their audience can become entranced with while relating to them. Their newest book Always Scream Fire is currently out, which is a continuation for Always Yell Fire. Their fifth book Full Moon Knights will launch May 7th and will serve as a new chapter for The Fin Series.

This book is so much richer and fuller with the re-edits; though you can still catch a glimpse of the author’s style peeking through here and there. The story is also a lot more engaging, with it flowing more smoothly as well. I ended up giving this book a four star rating and got a copy in exchange for an honest review.

This author has got potential; especially now that he’s brought on an additional editor. I’m very eagerly awaiting what he’ll be writing about next.