Review - The Taking of Peggy Martin by Karen Glista 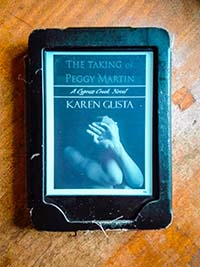 The setting is East Texas, where Peggy, a young nurse, works at an institution for the criminally insane. After her husband Danny is mysteriously killed in a car accident, she convinces herself that it was murder… and she knows the murderer by name… Jasper Johnson. When she gets notice from Marbelle Johnson, Jasper’s mother, requesting an impromptu meeting, she discovers that the filthy rich oil baroness believes Danny to have been the bastard child of her deceased husband, Charles Johnson.

Peggy, irreparably damaged from childhood by religious fanaticism, reluctantly agrees to exhume Danny’s body. Reeling with doubt, all the while fearing betrayal by the Johnsons, she finds herself bordering on insanity.

Shackled in darkness, Peggy throws herself into her work only to find herself face to face with a blonde haired, blue eyed schizophrenic in a straitjacket. Quite by circumstance she discovers that this patient, Morgan Dubois, who as a child was found burrowed in the ground in the Piney Wood Thicket, has a link not only to her late husband, but also to the aberrations of her mind.

As secrets are revealed and it becomes apparent that something or someone wants to silence their tongues, Peggy is forced to seek refuge with the Johnsons. Together, as death finds them, one by one, they set upon a perilous journey in search of truth. Deep in the heart of the Piney Wood Thicket, they stumble upon Cypress Creek and discover an existence older than time itself. Peggy, caught in a maelstrom of emotions, torn between two worlds, finds herself in a desperate battle, not only for her life, but for that of all of mankind.

Karen was born in a small town in East Texas in the early 1950's. Her mother was of European ancestry while her father was Native American. Her father passed away when she was two.

Her mother remarried and throughout her childhood and early teen years, Karen spent her weekends on her step father's family's farm in rural East Texas on the outskirts of the Piney Wood Thicket. Canning, picking peanuts, cotton, butchering hogs, churning butter, tending a smokehouse, raising cattle and cooking on a wood stove were but a few of her accomplishments.

Her first occupation out of high school was cosmetologist. She married, had a daughter, and enrolled in college. After receiving a degree in nursing, she specialized in helping those with psychological issues.

Her husband started working at the oil fields in Prudhoe Bay, Alaska which led her to eventually move to Wasilla, Alaska. After many years as Director of Nursing she was offered and accepted a position with Alaska Native Association in Fairbanks.

After a divorce. Karen decided to move back to the "lower 48" and found herself working child and adult psych in Chicago. It was at that time that she met her current husband.

She moved to rural Michigan into her new husband's home in the woods. She took a job in nursing and in her off time, developed an obsession with landscaping, gardening, and on-line gaming. World of Warcraft actually inspired her to write her first novel, Embellished.

Today, when she is not working as a registered nurse or writing, she enjoys family, friends, cooking, camping, canoeing the Pine River, Facebook, gardening, online gaming, reading, good movies (especially horror and paranormal romance), and her flock of chickens. She and her husband share their home in the woods with two cats, Flopsy & Mopsy, and their shaggy dog, Festus.

The pacing varied at times in this book, though it had a satisfactory ending – one where I was curious as to what would happen after the book ended. The narration is done from Peggy Martin’s point of view, and if you’re one of those that enjoy paranormal creatures/predator type reads that has a bit of horror laced in, try picking up this book.

This is the second book that I’ve read from this author – and have enjoyed this one as well. I suspect that this is going to become a favourite author of mine in the paranormal genre.