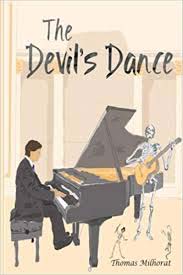 The Devil's Dance is a New York Tale about the life and loves of a young concert pianist who ascends from humble beginnings to the pinnacle of the musical world following his masterful debut at Carnegie Hall, when he is not yet 19. With newfound wealth and critical acclaim as "the next Rubinstein", he is drawn into the highlife of the 1950's and joins a jazzy circle of friends that includes Cole Porter, Truman Capote, Chet Baker, and Pete Seegar, among others. But above it all, he is haunted by the mysterious illness of his father that had started with "the fidgets", progressed to involuntary movements of the extremities and body resembling a maniacal dance, and ended in a long, agonizing, helpless descent into insanity and darkness. At his father's funeral, he is warned by a half-crazy aunt that their family has been cursed by the Devil. The years that follow are prosperous and happy, but at the age of 30 he too is beset with "the fidgets" and learns he has inherited an incurable condition known as "Woody Guthrie's Disease". The manner in which the young artist deals with his fate and the realities of human tragedy are the subjects of this novel.

Thomas Milhorat, M.D., is a world renowned neurosurgeon who lives with his family in Belford, NY and Manhattan.

Harry Braque seemed to be one of those humble people; and it’s sad how his career had to come to an end. One thing I will say is that I felt that the ending was a bit abrupt. I ended up giving this book a four star rating and got a copy in exchange for an honest review.

It’s the first time that I’ve read a book by this author, and it was quite a pleasant one.