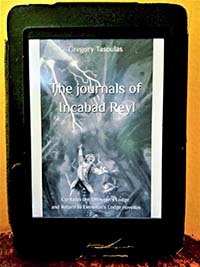 Genre: Fantasy; Sci-Fi with snatches of Steampunk and Cyberpunk

In a different Universe where electricity is the defining driving force of all natural existence, and life exists on floating islands called troves, Incabad Reyl is the greatest scientist of his time. It was his research on the 12 electrons that gave the Equation of fractal dynamics, the Equation that became the basis of Horizon’s modern technology. The Equation that brought about a better understanding of the echomagnetic fields of the 12 permanent Storms and ushered Horizon into an era of technological advancement based on its abundant electrical forces.

But his Equation was flawed and incomplete…

And so, decades after his famous research that put him on a pedestal as Horizon’s greatest scientific mind, Professor Reyl embarks on a clandestine adventure to find what he calls the Master Equation. An equation that will define the elusive variables of the Horizon's volatile and ever-changing echomagnetic fields. Or so everybody thinks.

His only ally a cryptic Oracle from the trove Ocheron, Lieutenant Auburn Thorn.

Together, the two men leave the trove Accadia, one of the ten Cradles of human civilization and travel to the distant and unexplored trove Tarn, where they venture deep into the uncharted jungle. With the help of Auburn’s oracular abilities, they discover an ancient technomagical building of unknown origins.

While the superficial harmony between the ten Cradles of humanity unravels around them, the two will have to face unforeseen adversities and betrayals, in a race to save humanity’s future.

Gregory Tasoulas was born on August 1979 in Athens, Greece. He was admitted to and studied to become an automation engineer in the technological institute of Piraeus but never finished his final year. He has a degree in pastry and baking arts and is now working as a pastry chef in Athens.

This was a very fascinating book – though it did confuse me at first; but once I slowly started getting the hang of the terms that were used – then I really started enjoying it. Along with Cyberpunk, it very occasionally had a tiny feel of steampunk as well.

If you’re into fantasy mixed with a little bit of sci-fi, definitely try picking this book up – the world that is in this book is quite interesting. I ended up giving this book a four star rating and got a copy in exchange for na honest review.

I hope this author carries on writing more books and make this into a series – I feel that there’s a lot that can be explored.