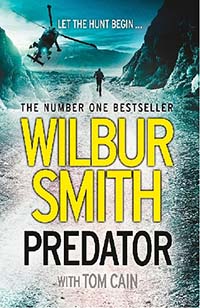 HECTOR CROSS, ex-SAS officer, private security expert, widower. His wife was taken much too soon, by a cruel man with evil intentions.

JOHNNY CONGO, psychopath, extortionist, terrorist, the man who murdered Hector’s wife. Cross wants him dead. So does the US government.

Congo is locked up on Death Row in the most secure prison in the free world, counting down the days until his execution. He’s got two weeks. He wants out. He’s escaped before and knows he can again.

Cross, still licking his wounds from his last bruising encounter with Congo, is back and ready for work. In the middle of the rough Atlantic stands oil supertanker Bannock A. Terrorist activity in the area has triggered panic and there’s only one person they can trust to protect her.

What is promised as a cakewalk turns out to be much more, a mission that will test Cross to his emotional and physical limits. But a life spent in the SAS and private security has left Cross hard-wired for pain and as he is thrown into the fire once more, he will not stop until he has snared his prey.

WILBUR SMITH was born in Central Africa in 1933. He was educated at Michaelhouse and Rhodes University. After the successful publication of WHEN THE LION FEEDS in 1964 he became a full-time writer, and has since written 30 novels, all meticulously researched on his numerous expeditions worldwide. His books have been translated into twenty-six different languages.

TOM CAIN is the pseudonym of David Thomas, an award-winning journalist with twenty-five years experience working at Fleet Street newspapers, as well as for major magazines in Britain and the US.

Connect with the Author(s):

The very brief history we get of the previous two books was quite appreciated; one thing I was hoping for was a little bit more of Jo Stanley, since she seemed like one of those solid characters, who had a very strong moral and value compass. Even though this book had one or two flaws, I ended up giving this leisurely read a four star rating – since for me the pros outweighed the cons.

Out of the series, this one was definitely my favourite.