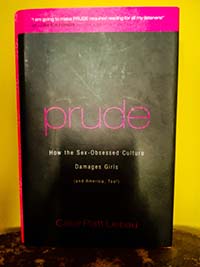 American girls today are forced to navigate a minefield more challenging, difficult, and pressure-filled than ever before when it comes to one vital topic: sex. Over the last decade, a new female imperative - that sexiness trumps intelligence and character at even the highest levels of influence and power - has emerged, undermining girls' sense of worth in their formative years and glorifying behaviour that is destructive to their future health, happiness and self-respect.

Carol Platt Liebau is an attorney, political analyst and commentator based near New York. She has provided analysis and commentary on national television for PBS, CNN, the Fox News Channel, and MSNBC, and has appeared locally on the Orange County News Channel and Cox Cable. She is a graduate of Princeton University, where she served as editorial chairman of The Daily Princetonian, and Harvard Law School, where she graduated as the first female managing editor of The Harvard Law Review.

I thought that there was a lot of value in this book - I ended up highlighting quite a bit. All women should have a go at reading this one - whether you end up agreeing with what is said or not. I'm not going to be saying a lot about the book here, because I'm going to be discussing it a bit on another blog post. I ended up giving this leisurely book a well-deserved four star rating.

For those wanting to find out my own opinions in more depth, I will be posting a link to the other blog post in my upcoming 'Week of Reading'.