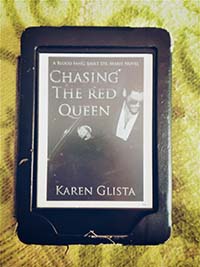 Donja Bellanger, suffering after the death of her father, finds herself in dire straits when her mom takes a new husband. Forced not only to move to a strange city, but to share a room with her glamorous, new stepsister, Makayla Hampton, her life spirals out of control.

Makayla lures her from goth to glam, straight into an exclusive club, not only for wealthy elites but Immortal Descendants. Donja crosses paths with Torin Mancini and he’s too damn handsome to be real.

Torin, who has concealed his identity as a powerful ancient sprit for eight hundred years, sets his eyes on Donja; there’s something about her blood, something he can’t walk away from. He’s not alone. A deadly predator has picked up her scent.

Stalked, she reaches out to Torin, but the lure of her blood has him on edge. As Torin battles his heart desires and feelings he thought buried and gone, one thing is clear: they have as much, if not more to fear of each other than the predator who would have her life.

Is love enough? Can she accept him for what he is and better yet, can he control his hungry, hungry eyes?

Karen was born in a small town in East Texas in the early 1950's. Her mother was of European ancestry while her father was Native American. Her father passed away when she was two.

Her mother remarried and throughout her childhood and early teen years, Karen spent her weekends on her step father's family's farm in rural East Texas on the outskirts of the Piney Wood Thicket. Canning, picking peanuts, cotton, butchering hogs, churning butter, tending a smokehouse, raising cattle and cooking on a wood stove were but a few of her accomplishments.

Her first occupation out of high school was cosmetologist. She married, had a daughter, and enrolled in college. After receiving a degree in nursing, she specialized in helping those with psychological issues.

Her husband started working at the oil fields in Prudhoe Bay, Alaska which led her to eventually move to Wasilla, Alaska. After many years as Director of Nursing she was offered and accepted a position with Alaska Native Association in Fairbanks.

After a divorce. Karen decided to move back to the "lower 48" and found herself working child and adult psych in Chicago. It was at that time that she met her current husband.

She moved to rural Michigan into her new husband's home in the woods. She took a job in nursing and in her off time, developed an obsession with landscaping, gardening, and on-line gaming. World of Warcraft actually inspired her to write her first novel, Embellished.

Today, when she is not working as a registered nurse or writing, she enjoys family, friends, cooking, camping, canoeing the Pine River, Facebook, gardening, online gaming, reading, good movies (especially horror and paranormal romance), and her flock of chickens. She and her husband share their home in the woods with two cats, Flopsy & Mopsy, and their shaggy dog, Festus.

I liked how the author uses culture, history and setting in the story – and the whole ‘vampire-type’ story-line is weaved very subtly in as well. This is a book that I really ended up enjoying – and gave it a very well deserved four star rating and got a copy in exchange for an honest review.

Since this is the first time that I’ve read a book by this author, and enjoyed it as much as I did; I will most certainly be picking up another one of her novels in the future. This is definitely an author to keep my eye on.