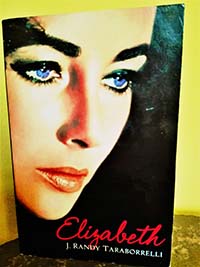 For more than six decades Elizabeth Taylor has been a part of our lives. Now acclaimed biographer J. Randy Taraborrelli looks past the tabloid version of Elizabeth's life and offers the first-ever fully realized portrait of this American icon. You'll meet her controlling mother who plotted her daughter's success from birth...see the qualities that catapulted Elizabeth to stardom in 1940s Hollywood...understand the psychological and emotional underpinnings behind the eight marriages...and, finally, rejoice in Elizabeth's most bravura performance of all: the new success in family, friendships, and philanthropy she achieved despite substance abuse and chronic illness. It's the story of the woman you thought you knew--and now can finally understand.

J. RANDY TARABORRELLI is the author of 20 biographies, 15 of which have gone on to become New York Times' best sellers, including his latest, "Janet, Jackie & Lee - The Secret Lives of Janet Auchincloss and her daughters, Jacqueline Kennedy Onassis and Lee Radziwill." Some of his other best sellers are: "Call Her Miss Ross," "Sinatra - Behind the Legend," "Madonna - An Intimate Biography," "Jackie, Ethel, Joan - Women of Camelot," "Elizabeth,"(a biography of Elizabeth Taylor); "The Secret Life of Marilyn Monroe" and "After Camelot - A Personal History of the Kennedy Family 1968 to the Present."

Taraborrelli's best seller, "After Camelot," was produced as a successful miniseries for the ReelzChannel (2017), starring Katie Holmes as Jacqueline Kennedy Onassis and Matthew Perry as Ted Kennedy. Taraborrelli was one of the Executive Producers, as were Holmes and Perry. His previous book about the Kennedys - "Jackie, Ethel, Joan - Women of Camelot" was a highly-rated miniseries for NBC, starring Jill Hennesey as Jackie and Lauren Holly and Ethel. It is available for purchase here on Amazon. The miniseries-tie in edition of "The Kennedys - After Camelot," is also available on Amazon.

His national best seller, "The Secret Life of Marilyn Monroe" was the basis of a miniseries of the same name for Lifetime, starring Susan Sarandon, Kelli Garner, Jeffrey Dean Morgan and Emily Watson. It aired to critical acclaim in 2015 and garnered 17 award nominations.

The research the author did was extensive; as well as the recommended reading he gives. Though, unfortunately – at the end of the day – I don’t think the subject of the book appealed to me as much as I initially thought it would. I ended up giving this leisurely read a three star rating.

This is the second book that I’ve read from this author – and out of the two – I definitely enjoyed ‘Madonna’ more. Though, even though I didn’t enjoy ‘Elizabeth’ as much as I thought I would; I’ll definitely still be reading more books from this author.