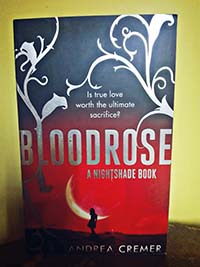 Calla has always welcomed war. But now that the final battle is upon her, there's more at stake than fighting. There's saving Ren, even if it incurs Shay's wrath. There's keeping her brother safe, evenif he's been branded a traitor. There's proving herself as the pack's alpha and ridding the world of the Keepers' magic once and for all. And then there's deciding what to do and who to love when the war ends. If Calla makes it out alive, that is.

Andrea Cremer is a New York Times and international bestselling author. She spent her childhood daydreaming while roaming the forests and lakeshores of Northern Wisconsin. She now lives in Manhattan, but at heart she will always be a small-town girl.

Andrea has always loved writing and has never stopped writing, but it took a horse and a broken foot to prompt her to finally write the novel she'd always dreamed of writing. Prior to becoming a full-time novelist, Andrea resided in the academic world where she taught early modern history.

When she's not writing, Andrea tries to master difficult yoga poses, wanders through Central Park, and hunts for new music to provide the soundtracks to her novels.

It felt as if there was a bit of scene setting in the beginning. I was still holding out hope with Calla and Ren, but then things ended as they did. I ended up giving this leisurely book a three star rating.

Alright, this book wasn’t as mediocre as the second book in the series, but not as good as the first either. I will most likely read another one of this author’s books in the future to see what the others are like.