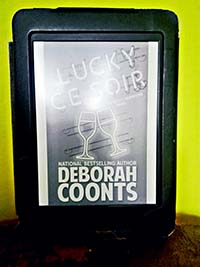 Lucky O’Toole is sure of it. What she isn’t sure of is how to deal with it. In Paris, far away from her Vegas home, Lucky is out of her element and out of ideas.

Especially when a fortune of rare wine is stolen from her fiancé’s family in a daring heist using the tunnels under Paris.

When an unsavory man from Lucky’s past shows up to implicate her in the crime, Lucky is left to debate the merits of a firing squad over a guillotine or…

She could find the wine and clear her name.

Easy…until people start showing up dead and everyone seems to want Lucky’s head on a pike.

Especially the lead police detective investigating the murder and the theft who happens to also be the torch-carrying flame of her betrothed.

Sensing an opening, Teddie, Lucky’s former lover, in Paris to open a musical review in Montmartre, gives her a shoulder to cry on.

A wise woman, Lucky runs, risking life and liver to find the wine and catch the killer before he kills again.

Then, and only then, will she be free to make a choice about her future.

It was wonderful to have Lucky O’Toole back, though there were times where the story seemed a little bit disjointed. This book had a slightly different feel to it – maybe because it was set in France. I ended up giving this book a four star rating and got an ARC in exchange for an honest review.

Out of the books that I’ve read in this series, this is most likely my least favourite so far. But even having said that, I still enjoyed reading another book about Lucky’s adventures.